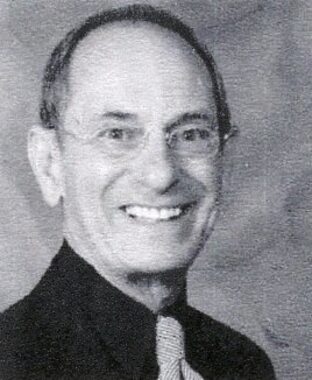 Back to Theodore M. "Ted"'s story

Theodore M. "Ted" Papoutsy of Hampton, formerly of Haverhill, Mass., Key Biscayne, Fla., and Rye, N.H., passed away peacefully on June 7, 2017.
Born in Haverhill, Mass., on April 26, 1931, he was the son of the late Mikel and Helen Gero (Linchy) Papoutsy.
Ted grew up around the shoe manufacturing business as his family owned shoe factories and others related to the leather and shoe industry around Haverhill. He spent many summers as a boy and young man working in the family factories with his uncles, John Xenakis and James Tikellis.
Ted graduated from Haverhill High School in 1949 and served in the U.S Army during the Korean Conflict. After being honorably discharged from the U.S. Army at the age of 23, he started his first manufacturing plant, Style Shoe Novelty, on Wingate Street in Haverhill, Mass. His company supplied materials and components to New England shoe manufacturers. The company then expanded to a nationwide distribution. He eventually owned several manufacturing businesses relating to the shoe and leather industry, consumer soft goods, glove industry and a tannery. He was also associated with Shain & Company, Boston, Mass.; National Footwear, Epping, N.H.; and Hoyt & Worthern, Bradford, Mass. He also acquired and became CEO of Bradford Associates in Portsmouth, N.H., a manufacturer of shoe components. During his career, he was the holder of many patents and developed a set of designs for a new type of sole for athletic shoes.
In the 1960s, as shoe imports started to impact the shoe industry in the United States, Ted moved his base of operations to Port-au-Prince, Haiti with offices in Miami and Key Biscayne, Fla. As President of Universal Industries, he continued to expand his businesses and distribution from Haiti. He was one of the first major U.S. industrial developers in Haiti supplying the U.S. shoe industry such as Stride-Rite and Sperry, the most popular boat shoe manufacturer. His holdings in Haiti included facilities producing 50,000 pair of shoe uppers per week and finished shoes for US distribution. He was also involved in a joint venture with the largest work glove manufacturer in Haiti. Ted became the largest employer in Haiti, with a combined work force of 4,000 Haitians. The cornerstone for the offshore operations was ownership of a Caribbean tannery. The tannery supplied leather to producers of shoe products, handbags, work gloves, belts, leather garments within the Caribbean communities such as building an employee infirmary for his employees, drilling artesian wells so employees could have a water supply to take home and upgraded other sanitation facilities. He was always interested in improving the welfare of his Haitian employees and implemented a workforce policy council.
In 1980, he sold all interests in the Caribbean and became involved in consultant work in various industries through the 1990s. During this time Ted served on various boards and civic organizations, as he was very interested in the rights of the elderly.
After retiring, Ted was involved in pro bono consulting work for numerous non-profit organizations assisting people interested in going into business.
He was a member and served as Chairman of the Senior Corps of Retired Executives (SCORE) Seacoast Chapter 185, in Portsmouth, N.H., since 1984, and served as an Assistant State Director of SCORE. In 2009, Ted was named the New Hampshire Small Business Administration's SCORE Counselor of the year. Ted's dedication to helping small business clients and the success of New Hampshire SCORE organization was a true inspiration to all who knew him. Ted's favorite quote was, "I would rather wear out than rust out and SCORE has given me that opportunity."
He was a member of the Holy Apostles Saints Peter and Paul Greek Orthodox Church of Haverhill, Mass., past member of the Haverhill Elks, lifetime member of 210 Associates, former Director and Treasurer of the Housing Partnership, former Director and Treasurer of the Rockingham Community Action, former Director of the Lamprey Health Care, a member of the New England League of Craftsman and served on the board of the Rannie Webster Foundation supporting the Webster at Rye assisted living and nursing facility.
Ted enjoyed all outdoor activities and was an ardent tennis player and gardener. He was an avid reader and enjoyed travelling.
He will be sadly missed by his brother, Christos Papoutsy and his wife, Mary; nephew, Mikel Papoutsy and his wife, Helena; nieces, Andrea Papoutsy Nunez and her husband, Phillip and Angela Papoutsy; grandnephews, Austin Lochtefeld, Christos Papoutsy and Roman Papoutsy; and grandnieces, Mary Gamvas and Lucy Heisey, all of Rye, N.H. He also leaves several cousins. He will also be sadly missed by his cherished, long-time friend, O. Rose Theos of Haverhill, Mass.
Relatives and friends are respectfully invited to visiting hours on Friday, June 23, 2017, from 5 to 7 p.m. at the Remick & Gendron Funeral Home, 811 Lafayette Road, Hampton, NH 03842. Memorial contributions may be made in his memory to the Holy Apostles Saints Peter and Paul Greek Orthodox Church, 154 Winter Street, Haverhill, MA 01830.
Published on June 21, 2017
To plant a tree in memory of Theodore M. "Ted" Papoutsy, please visit Tribute Store.

Plant a tree in memory
of Theodore M. "Ted"

A place to share condolences and memories.
The guestbook expires on December 17, 2017.

Restore the guestbook to view the 2 more posts by family and friends, and share a memory or message of condolence of your own.