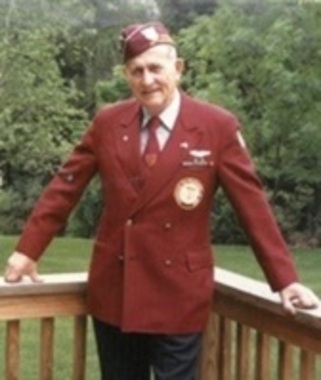 Back to Pierre's story

SOUTH HADLEY, MA. - Pierre Jean Jacques Kennedy, 96, passed away Tuesday October 15, 2019 at Vero (Wingate) at South Hadley, Ma.
He was born February 20, 1923 in Persan, Seine et Oise, France, son of Clifton Granville Kennedy and Marie Louise Caillerez Kennedy. Pierre grew up on Victory Ave. in Haverhill. The Kennedy home overlooked Kenoza Lake. He attended Burnham and Fox schools and graduated from Haverhill High School, Class of 1940.
He married Marilyn Blethen in 1949. They had four children, Eric, Alan, Paul, and Jane. He retired from Pratt & Whitney Aircraft, East Hartford, CT in 1986 as a senior design draftsman in jet engine design. He married Rosemary Rossi in 1970.
During World War II, Mr. Kennedy was a sergeant and tail gunner on B-24's, flying bombing missions with the 15th U.S. Air Force, out of Italy. His aircraft was shot down on Oct. 13, 1944 over the Blechhammer Oil Refineries in Eastern Germany. He was captured and sent to the prison camp, Stalag Luft 4 at Gross Tychow, Poland. Pierre took part in the 86 day forced march to the west (Feb. 6 to May 2, 1945) as Russian forces entered Germany. He was very proud of his military service. He was Adjutant of the Connecticut Chapter, American Ex-Prisoners of War.
He attended Northeastern University and M.I.T. and was a member of Merrimack Lodge, F & AM Haverhill.
He leaves his four children, Eric Kennedy of Boston, Alan Kennedy and his wife Laurie of Blue Bell, Pa., Paul Kennedy of Chicopee, Ma. and Jane Kennedy-Tenzar of Chicopee, and grandsons, Michael and Justin Kennedy. Pierre leaves a nephew, Donald Kennedy and nieces, Martha Kelleher and Anita Kennedy. He also leaves three step-children and step-grandchildren.
He was predeceased by his wife, Rosemary, and his former wife, Marilyn Newton, and his brother, Donald Earle Kennedy.
Pierre's funeral service was held October 18th at the Carmon Windsor Funeral Home in Windsor, Conn. and his burial service was October 19, 2019, with military honors at Elmwood Cemetery, Bradford.
Published on November 7, 2019
To plant a tree in memory of Pierre J. J. Kennedy, please visit Tribute Store.

Plant a tree in memory
of Pierre

A place to share condolences and memories.
The guestbook expires on February 04, 2020.