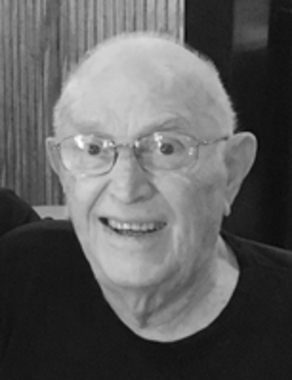 Haverhill, MA and Surprise, AZ - Constantinos V. "Deno" Danos of Surprise, Ariz., formerly of Haverhill, passed away on April 23, 2019 from complications resulting from an accident in his home.
He was 90 years old. He was the beloved husband of Bella Danos (nee Deros) for 62 years, who preceded him in death. He is survived by two sons, Vlassios C. and Savas C. Danos, a daughter-in-law, Patricia Thomas-Danos, a sister and brother, three granddaughters, a great grandson, and several nieces and nephews.
He was born in Stilia, Korinthia, Greece, served in the Royal Hellenic Air Force and immigrated to the United States shortly after his marriage. Settling in Haverhill, he opened a grocery business in Groveland, sold it, opened Deno's Liquors in Haverhill, and later retired from his position as a store manager for Shamrock Liquors. He was an active member of the Parish Council of the Holy Apostles Greek Orthodox Church, serving as the Secretary-Treasurer for many years. He was also an avid fan and follower of the Boston Red Sox and the New England Patriots. In retirement, Bella and Deno moved to Arizona in 2001 where he got enormous pleasure working in his garden.
A memorial service will be held on June 9, 2019 after the Divine Liturgy at Holy Apostles Greek Orthodox Church in Haverhill. His remains will be transported to Greece where he will be interred.
In lieu of flowers, donations in Deno's memory may be made to Holy Apostles Greek Orthodox Church, 156 Winter St., Haverhill, Mass. 01830 or to St. Haralambos Greek Orthodox Church, 7950 W Pinnacle Peak Rd, Peoria, Arizona 85383.
Published on May 23, 2019
To plant a tree in memory of Constantinos "Deno" Danos, please visit Tribute Store.

Plant a tree in memory
of Constantinos

A place to share condolences and memories.
The guestbook expires on August 20, 2019.